The last part of this year’s Folk Festival was the Folk Walk. Starting with breakfast in the White Horse, the group set off for the first short leg to the Lamb Inn. The theme for songs here was animals and we were joined by two dogs and a puppy in the beer garden, two of the dogs and their owners continuing on the full walk.

Lunch was at the Yew Tree, Longhope with some enjoying a Sunday roast from the carvery and others taking the lighter option of sandwiches. Faith and the Forest was the theme here, with the Yew Tree being a common sight in churchyards.

At the Box Bush end of Longhope the bar in the Nag’s Head was already home to some live music by two locals on electric guitar and vocals so the party retired to the new decking in the rear garden and found a cosy space around the sides of a bouncy castle, with songs on the theme of horses.

After a short walk to the Farmer’s Boy Inn , which featured a second bouncy castle, the group took shelter from the sun under some large table umbrellas (or parasols?)  and enjoyed songs on the theme of farming before a traditional group photograph in front of the horse mural on the side of the pub. Many also took advantage of the ice cream bar before departing.

The return to Mitcheldean passed through fields of barley and herds of cattle. Wild camomile was growing at the edge of one field, and the cherry trees along Bradley Court Road provided a welcome snack for those who could reach! Relaxing albeit briefly back at the White Horse, it was soon time for our American visitors from Renegade Rose Morris to retire to their lodgings at the Oakraven Centre, with many of the survivors joining them for a chilled out evening of good food, good company and music.

A big thank you to everyone who walked, sang, played, danced, watched, listened, and to all our helpers both front of house and behind the scenes. See you next year! 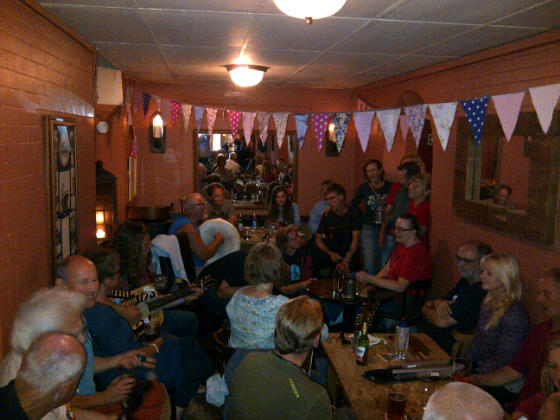 Folk session in the Brewery Tap

The Mitcheldean Folk Festival 2015 has begun. The Friday night regulars at the Brewery Tap are being entertained by (and in some cases joining in with) a mixed bag of musicians from near and far. Some have come from across the Atlantic Ocean whilst others have come from just across the road.

Come and join us this weekend for what promises to be a great event! 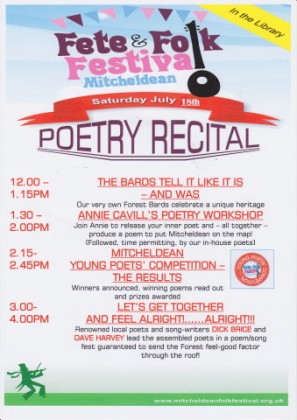 Don’t miss the Poetry Recital events at the Library during Mitcheldean Fete and Folk festival. From 12.00-4.00pm there will be recital, a workshop, performances and the results of the Young Poets’ Competition.

If you liked the live shows, why not relive the experience in the comfort of your own home, headphones…

19 tracks with almost 70 minutes of music from artistes performing at the 2015 Mitcheldean Folk festival. Includes performances from the Brewery Tap concert of 30th May.

Copies will be on sale during the festival at the special price of only £5.

This year’s concert will be taking place throughout the day in Mitcheldean Parish Church of St. Michael and All Angels.

12:00 – 12:50 — Introduction
Introduction, crowning of Festival Queen and performances by local schoolchildren
13:00 – 13:25 — Peaky Blinders
Acoustic duo play country and folk with a touch of bluegrass
13:30 – 13:55 — Tracey Dixon
Powerful and moving songs from this extraordinary Mitcheldean vocalist
14:00 – 14:25 — Tommy Lee Fallon
Country music with a mix of original and classic material
14:30 – 14:55 — Dave Thompson
One of Mitcheldean’s finest singers and musicians
15:00 – 15:25 — Rebecca Kay & Company
Ballads and folk songs with guitar accompaniment
15:30 – 15:55 — Uke Hunters
Expect Mumford and Sons songs, well known classics and originals from this Lydney ukulele and cajun band
16:00 – 16:25 — Mike & Fiona Taylor
Accomplished guitarist and flautist perform singer-songwriter items from the 1960s and 70s
16:30 – 16:55 — The Wanted Men
Storytelling and songs with guitars, harmonicas and stomp box
17:00 – 17:25 — The Vogwells
Gloucester guitar duo that perform and arrange traditional folk music
17:30 – 17:55 — Bygonz
Experience 700 years of English music on the pipe, tabor and hurdy-gurdy
18:00 – 18:25 — Clint Mann
Singer-songwriter with indie meets folk guitar thrash
18:30 – 18:55 — Sid Harvey
Folk/roots originals with a Gloucestershire twist on guitar, harp and washboard
19:00 – 19:25 — Drybrook Male Voice Choir
A male voice group singing a variety of recognisable songs
19:30 – 20:05 — May Thrill
Three musicians and vocalists combine to arrange traditional folk music in their own style
20:10 – 21:00 — Jules de Bharra and Friends
Distinctive vocal harmonies and accompaniment are on the cards tonight. The Jade-Olivia Patrick Band from Stroud are unable to attend so Jules will be bringing some extra friends to entertain you .